Tonight we were able to take down Heroic Baelroc. It took a few wipes...

...but everyone (except Craii the mute) discovered the art of communication and all was well. Now we only have Ragnaros (and his legs) left to clear Heroic Firelands. Also, someone pointed out I forgot the Heroic Majodomo Staghelm screenshot so I'll that throw that up here as well.

In the past couple weeks, we were able to clear a few more hero bosses. We should be able to start working on heroic Rag next week. For the rest of this week, we're off to Blizzcon!

For some reason I neglected to update the website in the past few weeks. Despite that, I assure you we have been killing monsters.

You may ask, what is the secret to our success? I think this sums it up rather well:

For all the hustle and bustle around Majordomo Staghelm being challenging, it seemed almost like a pushover when we killed him last Thursday. We wiped to the orbs a few times until we had our bowl of Lucky Charms. We paired people to orbs with raid symbols, had good spawn locations and that was the end of him. Ragnaros is next and hopefully we can get to him this week with everyone around before people start to head out for their late summer vacations. 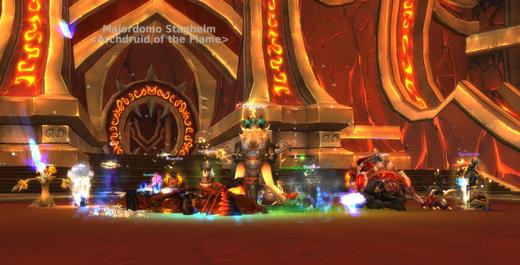 Shortly after taking off, Mexican Airlines flight 1993 originating from Mt. Hyjal traveled through hostile Firelands airspace crossing paths with Alysrazor. As a result, a number of violent tornadoes formed which wrecked havoc upon the surrounding area and appeared to be too hot to handle for those used to the frosty weather of the north. Luckily, the group was able to overcome the weather and slay the phoenix. 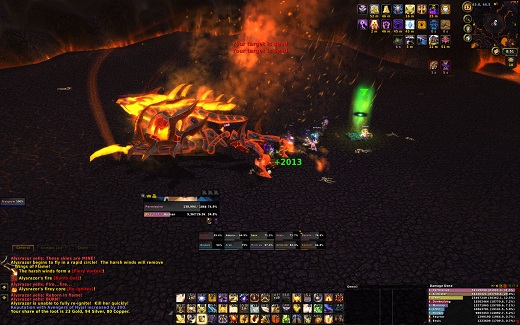 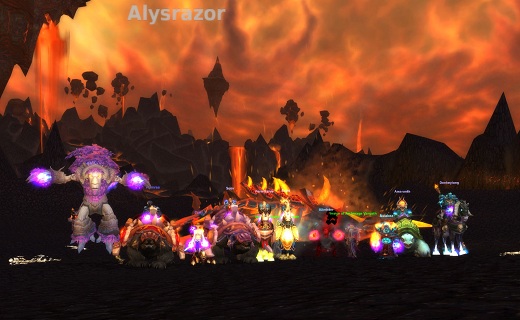 On Sunday, we killed Baleroc fairly easily after the healers got their rotations down. We also started working on Alysrazor. I usually write something a little more witty or comical, but I've got nothing today, sorry.

On the first day, we spent an hour or so attempting this guy and did pretty well. Upon returning on the second day, we were fairly confident of our impending success. However, it was not to be. It took a little longer than anticipated due to a variety of reasons including: using a shaman instead of a druid healer, mom chewing on router cables, lazer tag, Mexican driving services, slurpee & peanut vomit, turnstyle afk breaks, basketball in the hood and of course random acts of disconnect. Despite these issues, Lord Rhyolith is finally dead as move onto Baleroc next. 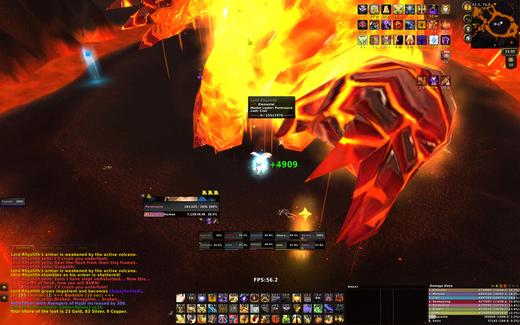 On our second adventure into the Firelands we managed to knock out another boss. Shannox took a couple more attempts than the fire spider but in the end, the result was the same. We also started working on Lord Rhyolith and made some good progress. We should easily down him when we return on Sunday. 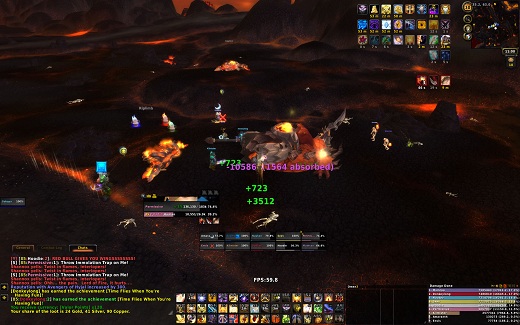 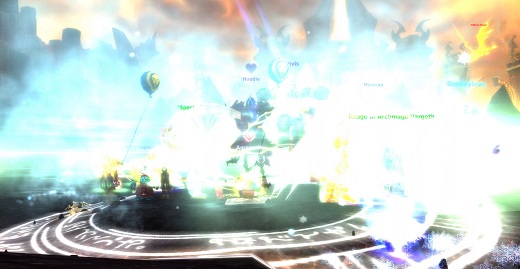 One Night, One Flaming Spider

With patch 4.2 dropping on Tuesday, we got our group together and stepped foot into Firelands for the first time. After a bit of trash farming...

...we came back on Wednesday for our first raid night. After clearing the superfluous trash packs, we found ourselves in tango with the giant flaming spider Beth'tilac. We split up into two teams and proceeded to take her out fairly easily. 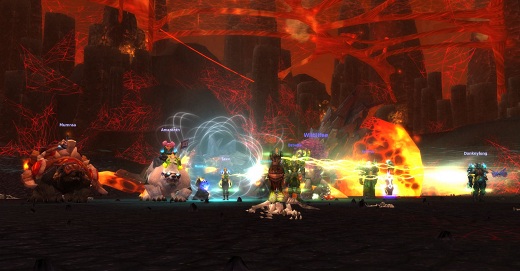 We then moved to take on Shannox but Blizzard pulled an SSC on us and decided to respawn trash in our face. He will have to wait till next time...

Getting Back in Gear 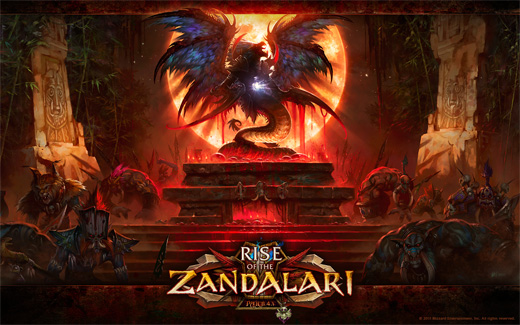 Now that 4.1 is out on the live realms, we are going to start getting ready for 4.2 and the next raid instance. We are currently looking to recruit a few people to refill our ranks and strengthen our core. We are specifically in need of a Mage, Shadow Priest, Warlock, Moonkin or Death Knight for DPS and a Resto Shaman or Druid for healing.

Just want to drop a small reminder to everyone that we are going on spring break for the next couple weeks and relaxing our raiding. Sometime after 4.1 hits we will resume and prepare for Firelands. Enjoy the break!

Three dragons are better than two

For a limited time only, you can get three dragons for the price of two! These dragons are state-of-the-art and come with a 1 week money back guarantee. If you act now, you will also receive this brand new achievement, Heroic: Halfus Wyrmbreaker, at no extra charge.

Blackwing Lair was merely a setback

For the second time in our raiding careers, we have managed to slay Nefarian. This time required no demo shout spam, random giraffes or broken bows. It was our last normal kill for the first Cataclysm raiding tier and we will move onto hard modes next week.

The Throne is Ours

In a scramble, we put together a non-scheduled raid to make a couple attempts at Cho'gall. We knew we were close last week and finally finished him off today. Now that Bastion of Twilight is clear, we turn our eyes to our old friend Nefarian.

We can now park in the handicapped spot

Moving through Blackwing Descent, we have achieved victory once again. This time it is the defeat of Atramedes, the blind draygon. We are working on Chimaeron for our next kill. 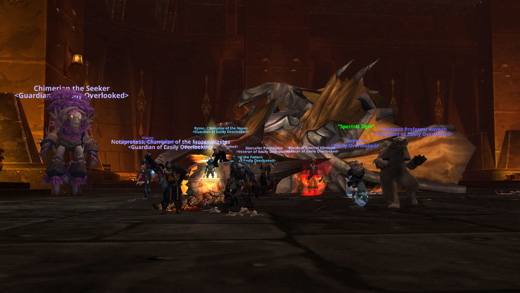 It seems we were a little less glamorous than normal in Bastion of Twilight last night. Despite that, we defeated Feludius, Ignacious, Arion and Terrastra; known collectively as the Twilight Ascendants. We are now 8/12 and should be improving that later this week when we step back into Blackwing Descent.

Rubbed another one out...

I am happy to announce that we have defeated Al'Akir the Windlord and cleared Throne of the Four Winds! This genie-man was really brutal and took a lot of concentration but we managed to take him down without using any of our three wishes.

We found out! For Science!

After our fair share of wipes for every possible reason, we finally downed Nefarian's evil scientist Maloriak. Good job everyone for a rough but successful night! 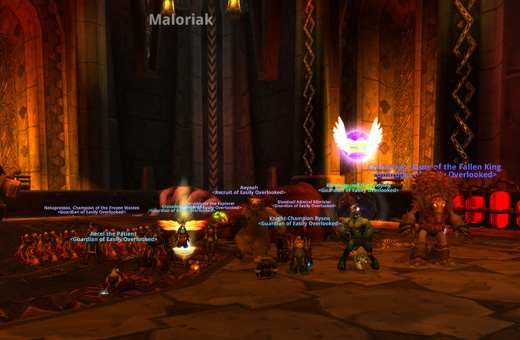 We found these draygonsin Bastion of Twilight the other day and decided to kill them.

Although scheduling raids has been tough during the holiday season, we managed to group up and take some stabs at the new raid dungeons. So far so good as we have downed four bosses without any preparation. We are looking forward to starting our regular raiding in January.

In our conquest for raid achievements before Cataclysm, last night we achieved:

Glory of the Icecrown Raider

After some wipes and strategy adjustment, we downed Heroic Sindragosa and completed: 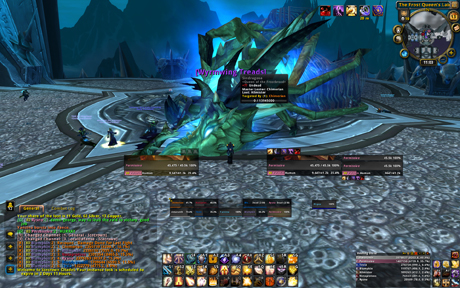 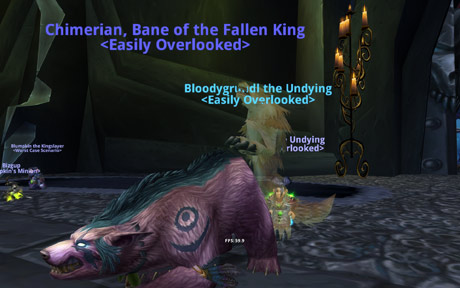 Grats all on their drakes.

We are currently working on a few achievements before Cataclysm hits. Most notably, Glory of the Icecrown Raiderand Heroic: The Twilight Destroyer. In addition to these, we have completed some others for fun. In particular, I would like to thank Bloodygrundl for his efforts in helping to get this one last night:

The Undying
Within one raid lockout period, defeat every boss in Naxxramas without allowing any raid member to die during any of the boss encounters in 10-player mode.
Title Reward: The Undying
10
11/07/10

I got the website up finally. I am hoping to add a bit more as right now there is only the news and some links. Here are some of things I'm looking to add:

I'm certaintly open for any suggestions as well so feel free to let me know if you have any ideas. 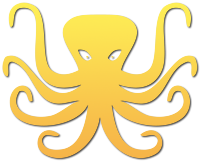 Easily Overlooked is a World of Warcraft 10-man raiding guild. We are located on the US PvP Korgath realm. Our focus is niether hardcore nor casual with a three-day per week raiding schedule. Please visit the recruitment forums for information about joining.